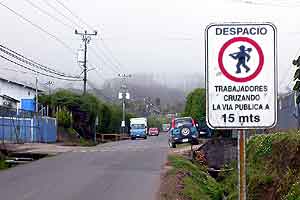 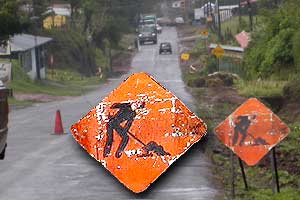 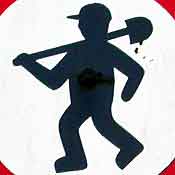 The first sign is special because it says Slow - Workmen crossing the street. The work is done — at least for today — and the men are heading back.

The placing of the sign is disturbing though. Fifteen meters is impossibly near and drivers in Costa Rica are supposedly very alert or the workers very fast.

The second find is a hybrid: the diamond shape is typical for the Americas but the man is taken from the Mediterranean Workforce: a group of related designs often found in countries around the ditto Sea. 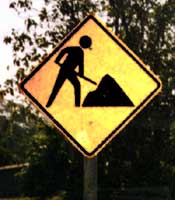 II.2007; pict. Van Herck & Demarest
Our find from 2007 was not a happy event. There is more European influ­ence. But instead of taking one of the nice designs of the past as an example (e.g. Belgium, France), Costa Rica opted for the faceless modern design from the Netherlands. Regular readers of this site knew it without saying.

The latest finds again give reason for some hope. The drawing may then be modern but is also local breed. The shovel is perhaps a trifle too big but the man wears a hard hat and that is good. 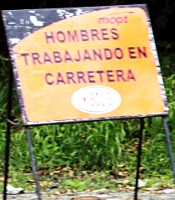