24.XI.2011; pict. O. Dochy
Looking at Men at Work signs from Ethiopia we noticed clear similarities with signs found in South-America. This is cer­tain­ly not the case for the Children's Crossing Signs which are all styled like signs of the old world (†) — that is as red bordered triangles instead of yellow diamonds.
The signs on the first row have in common that each person carries a bookbag and that both bookbags are at the outside. On the second row the bookbag of the shortest person is shown between them. Notice also that on that same row clear gender features have disappeared and that a different situation is shown. 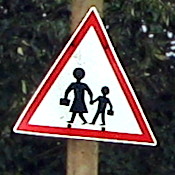 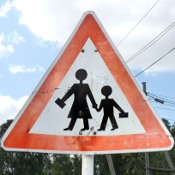 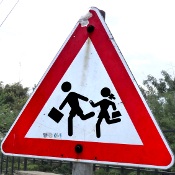 Notice how the head of most children is disproportionally large. Education is important but maybe Ethiopia should refrain a bit from stuffing their children's heads with know­ledge : some pupils —top row—risk breaking their neck because of the size of their head (‡). Could that be an adap­tation to crowded classrooms where the blackboard is half hidden behind many rows of pupils?

The first two finds belong to the UK-group of signs where the girl is the taller person who guides the boy. Notice that the first sign is much better drawn than the next one. The limbs are bent at the joints and this nice detail is gone in the next find.

A further step in the reduction of the quality is the find from Addis Abeba. It shows the adoption of the Children's Cros­sing Sign of the Mediterranean Group —explained in Malta. It was an opportunity to let the boy take charge. I am not certain whether he already has enough responsibility because he runs straight into the traffic with his sister blindly following. 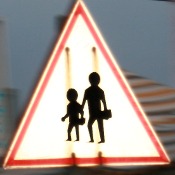 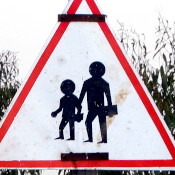 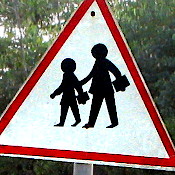 14.XI.2011; pict. O. Dochy
In the second row the second family of Ethiopia's signage is shown. Instead of walking, the pupils are now standing still and the taller boy (?) holds his smaller companion back and safe from the traffic. 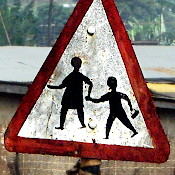 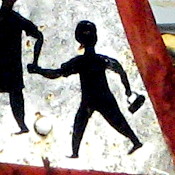 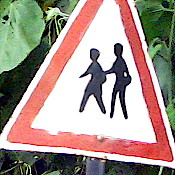 24.XI.2011; pict. O. Dochy
This sign is even closer to the UK-group than the first row. A sturdy woman drags a boy behind her. The boy has the sleeves rolled up, and the woman also. Are they on the road after a quarrel? The boy not wanting to go to school? And what about the bookbag? Is it a bookbag, a basket? Is he going to hit her with a flatiron?
Our pupils are grown up, but they carry a bookbag and there­fore the sign qualifies. But let's hope it is never used as a template for more.
† Well, there is one sign, the last one on the second row, which has a triangular old world canvas but is drawn like signs which are found in Bolivia.
‡ The same slender long necks have been reported from Morocco. Notice that in Morocco it is the boy who takes the lead.
Path: Home / Country list / Children's Crossing Signs worldwide / Signs in Ethiopia
e-mail:
More roadsigns from Ethiopia: Men at work - Falling Rock Signs