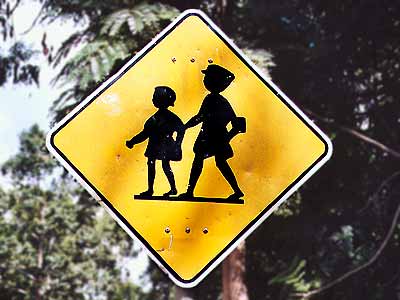 Let's start with the most common Children's Crossing Sign which can be found throughout with only minor deviations in the drawing.

The drawing is based on the early French Children's Signs — though Croatia is also a possibility. The shape and the background colour comes from the New World (e.g. Argentina).

The girl's headgear looks like a hard hat and the boy's probably wearing a soldier's cap. A clever piece of propaganda for the army: We care, it says. The boy is keeping the girl from inadvertently stepping into a mine field. The helmet gives her some protection against flying body parts of people less cared for.

One question though: What's the weird thing at his elbow? 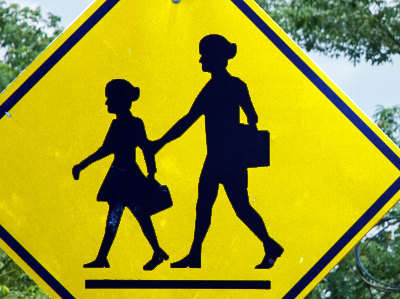 Our latest visit to the country yielded an entirely new sign without the smell of gunpowder. The design is much closer to the format of other countries: two persons, a boy and a girl, the boy is tallest, both carry a bookbag. Nothing out of the ordinary.

There is some weirdness though. First, I couldn't figure it out. Was it because they walk in the air? But then it struck: look at the heads. They have the same head; both children carry an old woman's head on their shoulders.