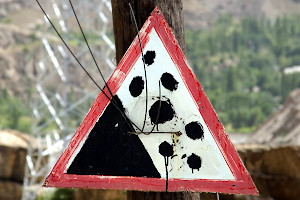 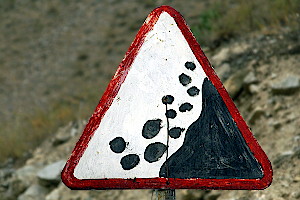 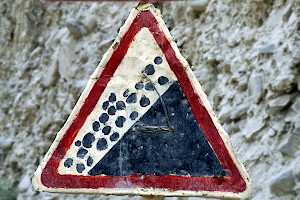 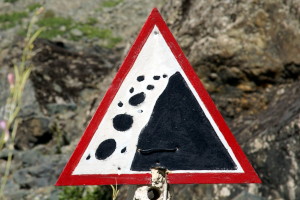 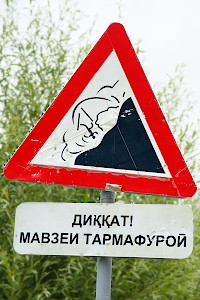 Bogev, Kuhistoni Badakhshon,
14.VII.2016; pict. J. Koelstra
All our Falling Rock Signs samples so far look like they are home made. It is not clear which signs served as examples for the painter. Neighbouring countries also have designs with large boulders which are custom made, but none of those feature similar constellations. Maybe the artist worked from his own inspiration.

Notice that the number of stones is rather high: 11 and 25 pieces is at the high end of the range — only six countries have more. The Philippines are at the top with 45 stones (see statistics on the number of rocks).

Our last find may be a warning sign for people to keep away from landslides. Unlike on other such signs (e.g. Canada, Faeroe Islands) no boulders are shown. Also notice the two strokes near the legs of the person; we may be looking at a skier in distress. Even though it was not found near the only ski­resort of Tajikistan, the sign could therefore very well be a warning for avalanches and not for falling rocks. I will give it the benefit of the doubt and keep it in the collection.