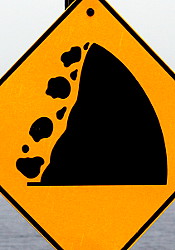 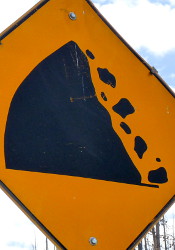 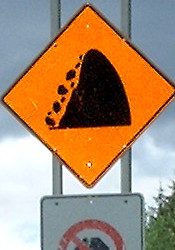 Glacier Park, British Columbia,
21.V.2006; pict. R. Mason
Falling Rock Signs in Canada all look alike. At least at first sight. Regular visitors —keen as they are— will probably immediately point to the differences and peculiarities in our samples. Notice the shape of the pebbles: droplets left, flat right. The top of the cliff in the sample shown at right is a round corner instead of a sharp one. Noticed the extra pebble?
Roadsigns should in order to warn effectively bring a real world dangerous situation to the mind. The signs at hand are suggesting that rocks come down in an orderly fashion with boulders and pebbles alternating. Maybe even during certain designated time frames of the day. This is not some­thing that in any way relates to my experiences on the road. Seeing this happen, I would most likely loose control of my vehicle. 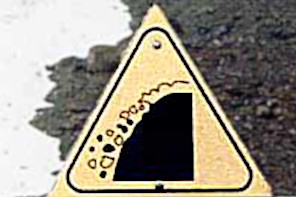 Jasper National Park, Alberta, IX.2000; pict. M. Plessers
Our next sample has a similar flaw. It is a warning for avalanches and the artist very carefully depicted boulders of both ice and rock. I count seven of each kind.

Teachers using this panel as a teaching aid (a picture or the real thing during an excursion) could unintentionally put their pupils on the wrong leg. It should be made clear that it is highly unlikely that a glacier is spitting blocks of ice and stone in equal amounts. 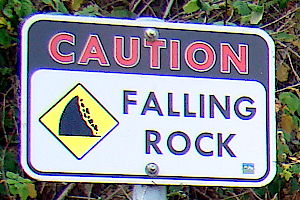 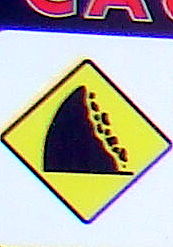 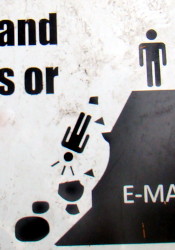 Malcolm Island, 11.VIII.2018;
pict. N. Heerink
The sign from Vancouver looks very much like all the other signs. There is, however, an improvement: the desig­ner has left the typical alternation of small and big pebbles for a more cre­dible rain of stones. Ten stones: so we now have panels with 7, 8, 9 and 10 stones from Canada.

Our last find isn't exactly a Falling Rock Sign; it is a warning for people not to inadvertently join the rocks on their way to the bottom of the sea. It is remarkable that the stones are taken from Hong Kong and not Great Britain (because then we would see three small stones instead of two).
Compare this with the Faeroe Islands.