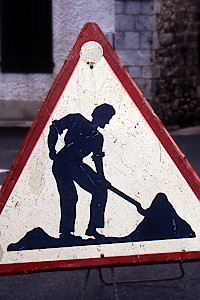 L'homme d'Alençon is named after the city where he was seen for the first time. At this occasion we couldn't add him to our collection. We thought he was lost for science forever. Fortunately we stumbled upon him a second time in Etsaut in the French Pyrenees. 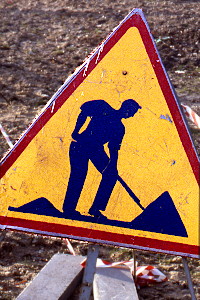 L'homme de Montbazon was also discovered during the succesful 1992 expedition. It is still the only observation. Very good detail in the drawing of the man. The heaps need some more attention though. 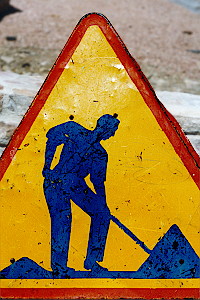 The detail in these old style signs is amazing. The workers actually feature a face with a nose and a chin. The first man has wavy hair and the second one decidedly a hair quiff. Notice the rolled up sleeves for the first and the short sleeves for his colleagues. 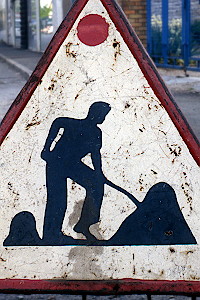 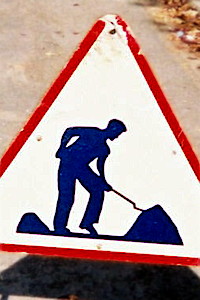 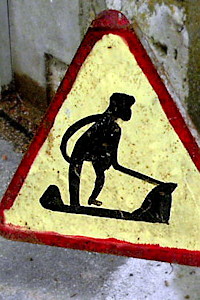 Gien, 30.iv.2004;
pict. P. De Priester
Roadsigns of the old style come in several variations which often are not an improvement. They have some features in common, however.
Two heaps are shown. When the blade of the man's shovel is shown, it is held in an orientation that allows real scooping. Finally, the man supports his weight with the leg that is furthest back. 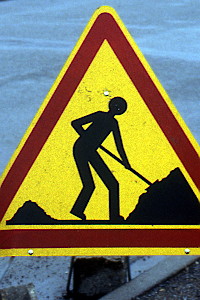 Arras, x.1992
The modern designs have in common that the blade of the shovel has been turned a quarter of a turn, making the tool unusable.

As a rule the second heap, behind the worker, is removed. Probably for safety reasons, in order to prevent the poor man from tripping over when he steps back without thinking.

The front leg supports the weight of the man.

On rare occasions we find a panel that shows elements of the old and new design. It may be a new drawing with a featureless worker (left), but having two heaps which is a primitive feature. Alternatively an old fashioned worker may be shown, but without the second heap (right). 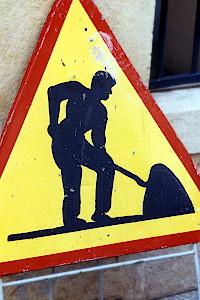 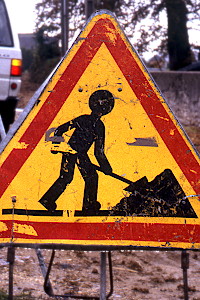 everywhere, onward 1992
The French worker approved by Monsieur le Président. You can find him everywhere in great numbers. 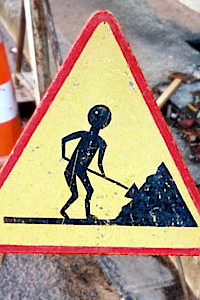 Rogny les 7 Ecluses, vii.2002;
pict. P. De Priester
In spite of standardisation, some­times a non–ISO worker leaves the factory. From a collector's viewpoint, it can't happen often enough. But it is sloppy work all together. 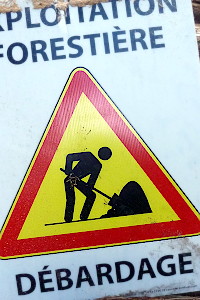 Morvan, 04.xi.2016;
pict. G. De Knijf
We saw it coming with the Children's Crossing Sign of 2011. France is abandoning its own designs and is now planting road signs heavily in­fluenced by Spain. The heap is taller, but the man is identical.
Path: Home / Country List / Men at work in depth / Men at work in France
e-mail:
More road signs from France: Children's Crossing Signs - Falling Rock Signs